The places people feel safe are the places they should fear.

The “haunted” house they point to on the corner that is hidden by pine trees with the headstone in the backyard is inhabited by spiders. And a raccoon. 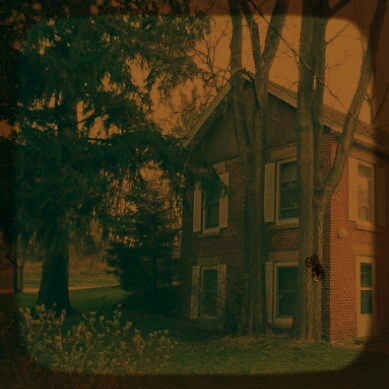 But the cafe they frequent..their first grade classroom.. the goddamn mall bathroom…these are the places that should make their skin crawl.

She had been after me for months to go on a ghosthunt with her. She’d set a date, I’d plan around it, she’d call me an hour before I was supposed to leave and giggle into the phone.

“You know what? Maybe I should go. I’m a tough girl. I could kick a ghost’s ass, right?”

I would nod on the other end of the phone, add an appropriate laugh and say “Yah, sure,” like I was supposed to.

But, right after “I could kick a ghost’s ass,” she would remember some bit of gossip or minor drama in the life of a girlfriend I never met. The time for me to leave would come and go, sunset would come and go, and she would finally hang up when Craig Ferguson came on. 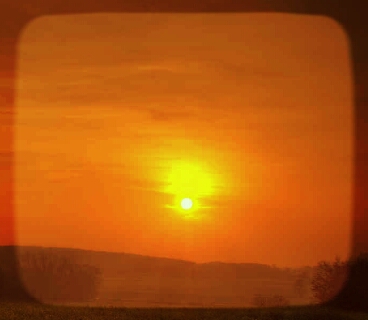 I don’t know how many dates were made and broken that way, but finally, one time, I managed to make it to her house without her cancelling.

Her house was a light green double-wide with gray plastic, inoperable shutters, and a narrow cement pathway leading to one stone step and a screen door.

She liked pretending to play hostess. The floor was freshly vaccuumed, the scent of carpet freshener hung in the air and her coffee table was set for, what she imagined, was tea.

I had never been to her house, but it looked like her. Decorations, pictures, and even pillows inspired by a mish-mash of who she was, what she thought she was, and everything she liked about who her friends thought they were.

She apologized for not being ready yet, she wasn’t done with her makeup and she had yet to pick out and outfit (to impress the ghosts, I supposed). She daintily poured herself a cup of tea from a new tea pot and invited me to have some while she finished up. 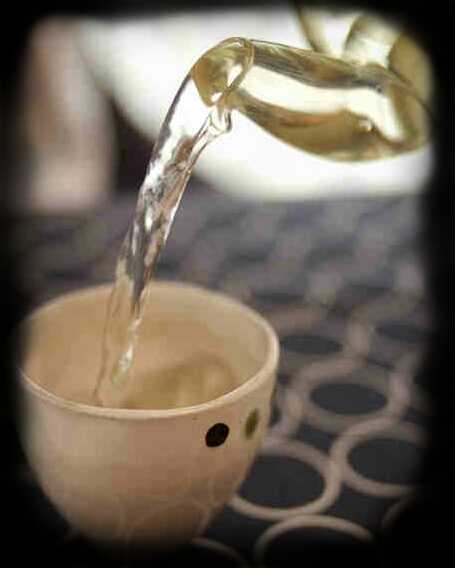 By now, I knew something was wrong. It was like a smell that was out of place, something subtle that made it impossible for me to get comfortable.

I took the liberty of turning on the tv. I poured myself a cup of tea and breathed in the steam…herbal, peppermint, no thank you.

There was a creaking sound to my right. It came from a short hall which, from what I could tell, led to storage space.

I shook it off, leaned forward and picked up a cookie from the shiny three-level tray and investigated it. It was shortbread with almonds pressed into the top. Also a no.

Something quivered. The air or the sound in the room…something moved. I eyed the room and saw nothing.

I called her name. She didn’t respond. I muted the tv and listened. I could make out the sound of a radio and her semi-singing along with the music.

TV sound back on, spidey-senses wired.

It sounded like someone had taken the lid off of a plastic bottle and dropped it, letting it bounce off the kitchen counter and onto the linoleum floor.

I held my breath and leaned so I could see part of the kitchen. There was utter silence. I sat back on the sofa.

Everything was quiet for about a minute. It was enough time for me to calm down a little.

Glass, something falling on glass…Anybody who has ever been around a glass tabletop knows that terrible sound.

She had built-in glass shelves in the partition between the living room and the kitchen. There was a clear glass bowl filled with light pink marbles on the top shelf.

I stood up, petrified that I would find a chipped shelf and a marble on the blue carpet below it. In four steps I was there and there wasn’t a chip in the glass or a marble on the floor.

The whir of my own thoughts had blocked out the silence, but when I established nothing was out of place, I heard how loud it was. Under the electrical hum of the  television, there was a hard line of quiet.

Thop! Like somebody dropping a penny on the carpet.

I smirked to myself. This person thought themselves pretty damn hilarious.

“Hello?” I asked to nobody, and Nobody said nothing “Alright,” I said and sat back down.

There were no more noises for two minutes together. Then creaking started again, and this time it sounded like steps.

This wasn’t proof of anything, I thought. It was proof that I had walked across the carpet and given the floorboards something to complain about.

The creaking stopped and noise in the kitchen started. Sounds like things being moved in the sink and slid across the counter.

By this point, I kept aware of the activity but was tired of it. There was all this showy noise and bother, but no meaning to it. They weren’t trying to get a message across. They felt no particular love or hate towards me or the current resident. Whoever they were, they were simply there like a clumsy dog or a pet squirrel.

The room got close. I began to tighten up and it took me a moment to figure out why.

Not too many years ago, it was rather posh amongst 13 to 20-somethings to have a “mosquito” ringtone on their cellphones. People over a certain age weren’t supposed to be able to hear it and it was great fun for everybody who could.

I haven’t ever been able to truly hear it, but I would know when somebody was using it. When the ringtone would sound, I would feel an uncomfortable pressure in my ears. Even in a crowded place, I could feel that stupid ringtone coming at me.

The feeling I had now was as if a mosquito ringtone had been set off that effected not only my ears, but my entire body. For the moment, all the pressure was on my right side, toward the kitchen and dining area.

I was being stared at. I dared not turn my gaze to where I knew Nobody would be.

So we were two beings alone and silent

I waited for any communication for several long moments, but to no avail.

“Really, what?” I asked again.

Then a rather naughty notion crossed my mind. I smiled a little to myself, but contained it.

I picked up that same shortbread cookie with the almonds on it and placed it on the coffee table. Slowly, with my forefinger I pushed the cookie across the table until

The cookie hit the floor and I looked at the space where Nobody was.

There was another quiver and then a hardness like a persed mouth.

At that moment, the hostess returned, dressed to the nines in a blue satin camisole, a black lace fringed cardigan and a new pair of jeans. Her eyes were her best imitation of a smokey makeup look and her hair was pulled up into some clip. She was all smiles.

“Sorry about the wait. I think I’m done now. I had to change my sweater, I decided my other black looked trashy with my ‘ohnsohmb’.”

“I’m feeling kind of sick, actually,” I stood up and straightened my shirt and pants.

“Oh, no. Is there anything I can get you? Anything I have here? What did it?”

“Well, was that peppermint tea?”

“That’d be enough,” I said with a crooked mouth.

“Oh, the tea. Dammit, and we were almost out the door,” she laughed nervously.

“Yah, that’s the way it goes. We’ll have to reschedule,” I zipped up my coat and headed towards the door.

“I’m sure you’ll find something.”

“Hell yeah, I’ll find something. I haven’t talked to Nastashia or Pauline in a while. Maybe they aren’t busy.'”

“There you go,” I smiled in earnest. I couldn’t say I wanted her evening ruined. “You have another plan and the sun hasn’t even gone down yet.”

I pulled the door open, apologized for bowing out on account of nausea, did the obligatory hug thing and walked up the cement path to the car.

There was pressure from both sides of me.

Reluctantly, I stopped and put my hands in my back pockets. “Yeah,” I said and bit my lip waiting for an answer.

There was Nobody saying nothing. I couldn’t see her (she felt like a her) but I got the impression of narrowed and eyes and lips still persed.

I took a step forward and the pressure increased.

“Look, you don’t have anything to say to me. You’re upset because I didn’t climb the walls.”

“And I don’t know if she simply won’t hear you or if you don’t do this when she’s around, but dropping things isn’t going to get you anywhere with me.”

Right then, my hostess yelled from her front door to make sure I was okay.

“Yeah, I’m fine. Thought I forgot something is all.”

“Oh! Do you have everything?”

“Yep, I’m good. See you later.”
I stepped forward purposely. Nobody didn’t stop me, but as I stepped away I waited for her to make another move.

“Bye,” I murmured as I stepped down into the car. Whoever Nobody was, she never did say anything.

I pointed my car away from home. There was a new opening in my schedule and like my hostess, I was going to make the most of it.

There was an error retrieving images from Instagram. An attempt will be remade in a few minutes.